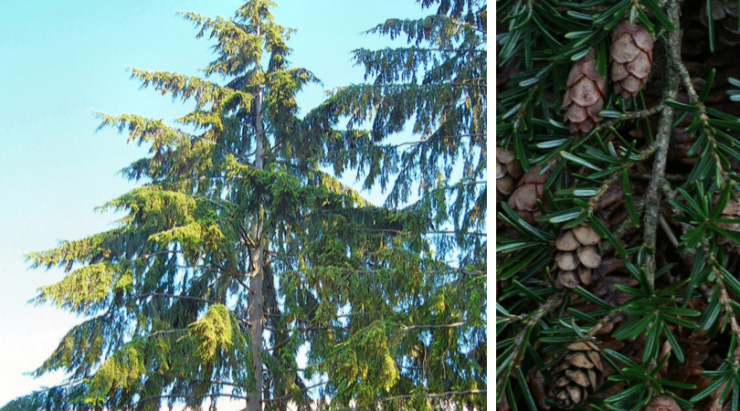 Distinguishing Features – A tall, coniferous, evergreen tree with a straight trunk, down-swept branches and open, pyramidal crown with a nodding tip; growing to a height of 30 – 50 m and a diameter of 1 m.

Needles: nearly flat, soft, glossy, widely spaced along twigs, of two lengths with the shorter ones standing upright along the top of the twigs producing a feathery, flat look yellowish-green on top and whitish on the underside. Bark: dark brown to reddish-brown, becoming thick and strongly grooved with age. Cones: numerous, small 1.5 – 2.5 cm long, greenish, turning brown with age hang from the ends of the branchlets.

Native to both the east and west sides of the British Columbia Coast Ranges, from sea level to mid elevations, as well as in the interior wet belt west of the Rocky Mountains; usually in association with other tree species; tolerates shade and can grow on decaying wood or even raw humus.

The wood of the Western Hemlock has an even grain and resists scraping, which makes it easy to machine. It is commonly used for doors, windows, parts of staircases, ladders and other architectural millwork items.

The scent of the crushed needles reminded early settlers of a European weed with a similar smell; hence the name “Hemlock”. The tree is not related to poison-hemlock.