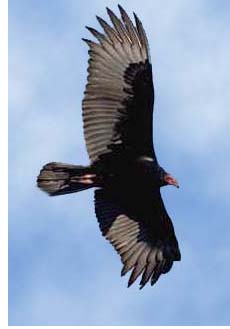 The summer range has been restricted primarily to the southwestern areas of the Northwestern Ontario region around the Rainy River. However, the Turkey Vulture’s range has extended further north in recent years.

A large colony is now a common sight at Dog Lake, north of Thunder Bay. They prefer mainly deciduous forests and woodlands but are often seen in open country and lakesides; roost in large congregations in secluded woods.

Rock crevice, a hollow tree or in a hollow fallen log without lining.

The Turkey Vulture can coast for hours, swaying from side to side and riding on rising columns of warm air called thermals, while searching for a food. Wings are held in a V when soaring, unlike eagles which hold their wings straight out.

Turkey Vultures are carrion feeders which they locate by vision or possibly by smell. They are often seen feeding in groups on large items but will eat almost anything.

With the onset of fall, they migrate south to their wintering range in the southern parts of the U.S. or Central America.