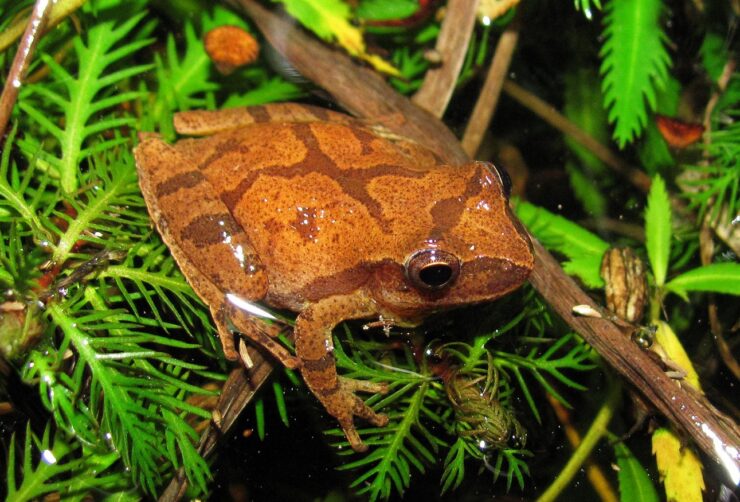 Distinguishing Features – One of the smallest frog species in Northwestern Ontario. Overall colouration, varies from gray to varied shades of brown. Some may appear rust red or orange. As with many other frogs, shade of color is affected by temperature. A characteristic dark X intersects the back. Random dark dashes often mark the body. A dark stripe runs vertically from the snout, through the nostril and eye to the neck; a horizontal bar on the upperside of the head connects the eyes. The legs often have bars on them. Underside is a slightly lighter shade of the background color. Spring peepers possess tiny toepads, but smaller than those of larger treefrogs.

Found throughout the southern regions of Northwestern Ontario near woodland edges; not in open areas or large bodies of water. Smaller wetlands, that may dry up later in summer are used for breeding by spring peepers.

The normal breeding season lasts from late April through May. Eggs are usually laid in small clusters. The small tadpoles transform in about three months.

Spring peepers eat small invertebrates which they hunt at night in low vegetation around woodland edges.

They hibernate on land and allow the water in their bodies to freeze. Converted glucose flowing through the organs prevent ice crystals from forming.

The distinctive ascending peep peep peep call of spring peepers can be heard early in spring, soon after the thaw. Rural residents are very familiar with the sound of the large chorus which can be nearly ear-splitting.