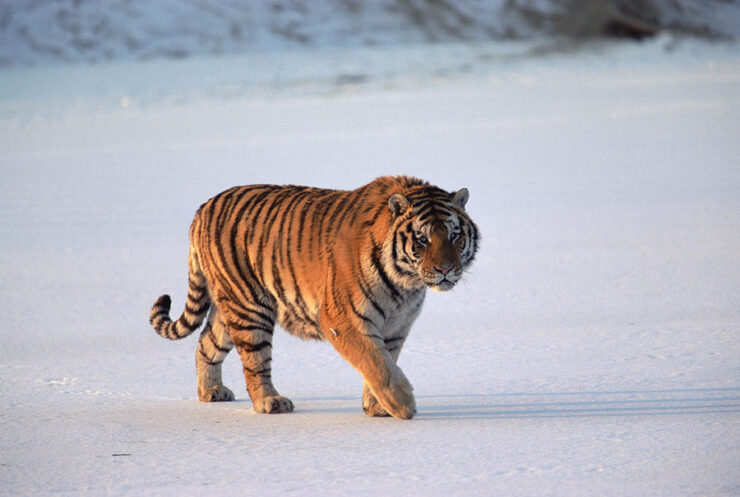 Distinguishing Features – The Siberian tiger bears the typical markings of all tigers and is the largest of all the wild cats. A male can weigh more than 300 kg. and measures 2.7 – 3.6 m. long from its head to the tip of its tail, the female is a little smaller.

They are found in the Ammur-Ussuri region of Siberia and also in northern China and Korea. Its former range included Manchuria in China and the Korean peninsula. Very few animals remain in these parts. The range of the tiger in the Russian Far East is much larger than that of the Amur leopard. It extents further north into Khabarovsky Krai province.

Carnivore. The Siberian tiger needs large prey to survive, like boar and red deer; will hunt for elk, lynx, even bear or smaller prey like fish, rabbits and hares.

Like the Amur leopard, the Siberian tiger has known bad times. At the start of the century, when Russia just lost the war against Japan, there was anarchy in the region. When the communists took over this was not an improvement. Reserves were used by party bosses to organise big tiger hunts. Outside the reserves the tigers had no protection whatsoever. After the second world war less than 50 tigers remained.

At the eleventh hour the situation changed for the better. In 1947 the tiger was granted full protection and the shooting of important prey, boar and deer, was limited. Moreover, the war had decreased the tigers only enemy: man. Vladivostok became a strategic city during the cold war when the relations with China and NATO were tense. All activities in the area were regulated and even Russians weren’t allowed to travel to Vladivostok without special permits.

Along the border with China a prohibited zone of approximately ten kilometers was established. Poaching of tigers was relatively rare, because there was no market for skins and other tiger products. The tigers made a remarkeble come back. Probably as many as 500 tigers roamed the forests of the Russian Far East at the end of the eighties. At present Siberian tiger numbers in Russia are estimated at 400 individuals. This is still the largest unbroken tiger population in the world.