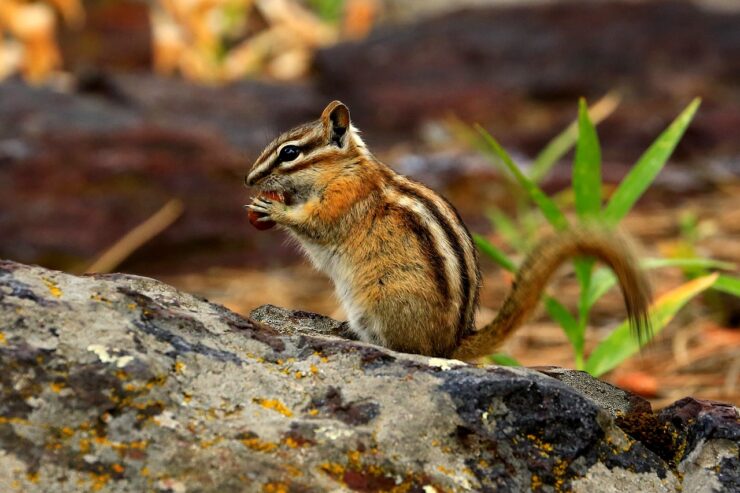 Distinguishing Features – The Siberian chipmunk’s body length is 12 – 17cm, two-thirds of its total length. Like other chipmunks, it has brightly colored fur, dark stripes, and large cheek pouches. Its ears are small and slightly rounded at the tips. The fur on the back is brown-gray to ocher yellow, depending on the origin of the animal. It has four light and five dark longitudinal stripes along the flanks and a light brown colored tail with broad black lines on both sides and narrow white edges.

The taiga and temperate forests of Scandinavia, western Russia and Asia. The Siberian chipmunk is a forest animal. With needle-pointed claws, it is an excellent climber, but it lives predominantly on the ground. They live in lodges that are constructed on the ground. In northern Asia the Siberian chipmunk lives in the same habitat as the larch tree, and in Europe it inhabits regions where the Scotch pine grows.

Siberian chipmunks bury their food 5 cm under ground. They clean themselves all over, starting from the back to the tail, and sometimes they groom one another. They make a number of different sounds, including a short “cheep” that sounds like a bird call and lasts for about 1/5 of a second. This call, which is produced if the chipmunk is frightened or agitated, is produced as 3 to 6 syllables repeated in a series. These chipmunks also give off a soft and deep croaking sound, perhaps related to mating behavior. Siberian chipmunks are active during the day.