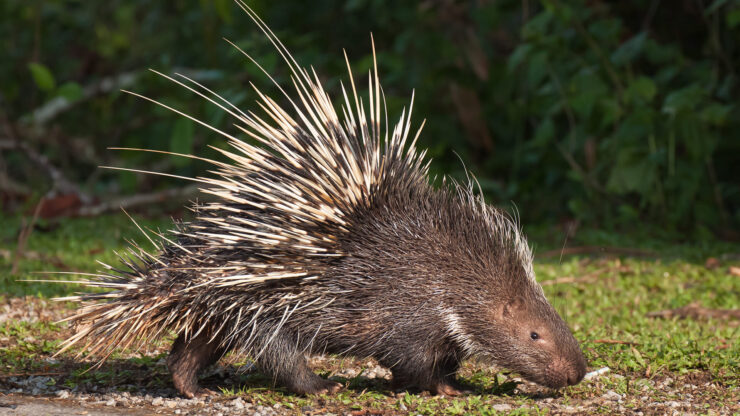 Distinguishing Features – Overall colouration, glossy yellowy-brown, darker on back. Back and tail covered with thousands of sharp-pointed quills. Legs, short.

Mainly a herbivor, the porcupine’s diet consists of leaves of shrubs and trees, a variety of boreal forest herbs, inner bark and needles of trees (preferring white pine). The porcupine has a taste for salt which accounts for its habit of eating anything that has a high sodium content. It will even wade into ponds for waterlilies and other water plants which are high in sodium. On occasion, it will even eat man-made objects such as oars and boat seats, and even outhouses.

The porcupine do not reproduce in large numbers, having only one offspring a year (rarely 2). However, they do thrive in large numbers and have only a few natural predators. The fisher is their prime, natural enemy; sometimes, bobcat, lynx, coyote, gray wolf, red fox or great horned owl.

Because of their tree-climbing ability and the natural protective layer of sharp quills, predators quickly learn to stay away from the porcupine. When the quill penetrates the flesh of an aggressor, the muscles of the victim draw it deeper, causing festering and even death on occasion. Many a domestic dog has made a trip to the veterinarian to have quills surgically removed.