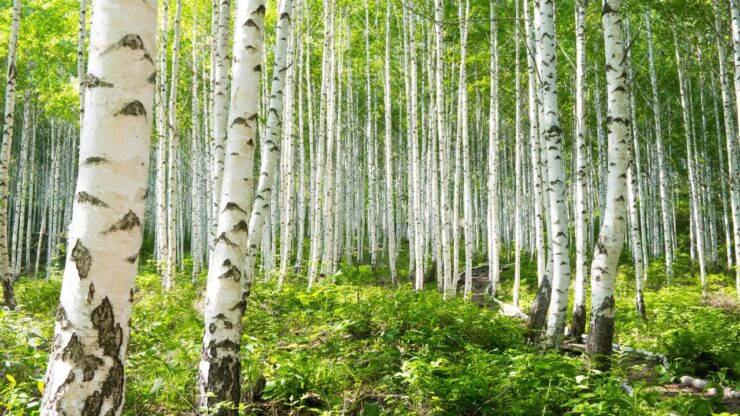 General – small to medium-sized, averaging 16 m (54 ft) high, broadleaved hardwood with a small, open crown of spreading and ascending branches. Branchlets are slender and a red-brown. On young trees, trunk bark is reddish-brown but turns to its characteristic white colour as the tree matures. The trunk generally divides low into several arching branches.

Flowers – flowering late May to early June depending on location. The flowers are monoecious. In the late summer, staminate flowers are preformed in catkins 2 to 2.5 cm (0.75 to 1 in) long at the ends of twigs and lateral shoots. These mature and grow in length to 4 to 10 cm (1.5 to 4 in) in the following spring. Pistillate flowers are borne in cylindrical catkins 2.5 to 5 cm (1 to 2 in) long and 8 mm (0.33 in) in diameter on the same tree. Two or three (rarely four) aments cluster on lateral spur shoots and disintegrate when mature.

Throughout Northwestern Ontario, most common in the proximity of Lake Superior. Exists across a broad range of soil/site conditions in a variety of species associations, paper birch forms either pure stands or mixtures of varying proportions.

Pure stands are generally succeeded by other species, but some remnant birch can be maintained in openings in stands of other species thought to be climax for a given locality. In other instances, intimate mixtures with long-lasting types are characteristic.

White birch is harvested for pulpwood, specialized lumber and some veneer. The paper-like bark was traditionally used by the North American Natives for canoe construction. Young regenerating stands of paper birch and associated species provide prime browse and cover for deer and moose.