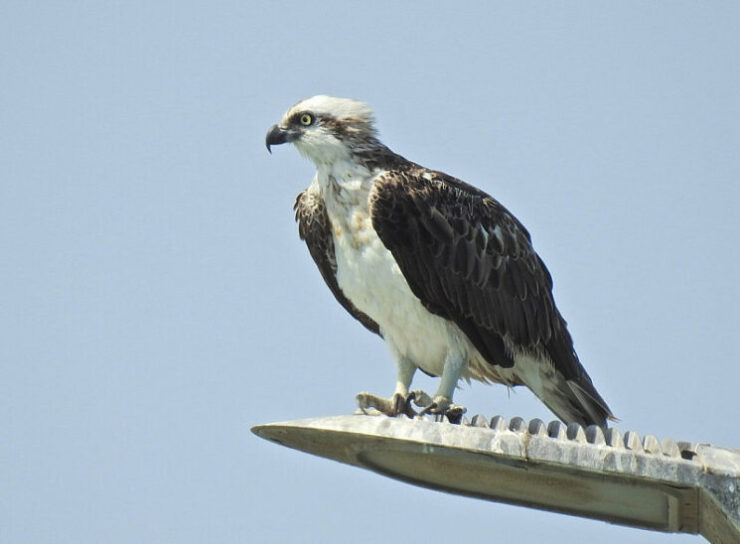 The male is usually all white below whereas the female has a necklace of dark streaking. The wing has a distinctive bend at the “wrist” and from a distance can resemble a gull. Male is slightly larger than the female. 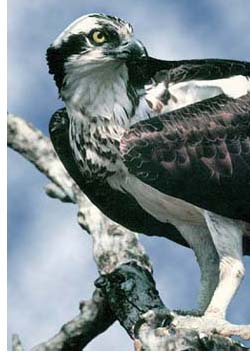 Primarily near waterways such as wilderness lakes and larger rivers.

The nest is a bulky mass of sticks and debris placed in a tree, on a telephone pole, on rocks or on the ground.

Unlike their raptor relatives, the Osprey eats fish almost exclusively. They catch fish in a dramatic way by diving into the water from a height of up to 40 meters. The opposable outer toe and the sharp spines on the soles of the feet, help the Osprey to grasp the wriggling fish until a safe perch is reached.

Male Ospreys provide virtually all the fish for the family while the females remain at the nest for much of the summer. In the Great Lakes region a variety of fish species are eaten, depending on local availability.

Human population growth and industrial development has contributed to the loss of natural Osprey habitats. By the 1960s and early 1970s, birds and other aquatic wildlife on the Great Lakes began showing signs of experiencing reproductive problems. Fish-eating birds, such as the Osprey, are exposed to toxic contaminants through the fish they eat.

Since the early 1970s biologists have studied birds in the Great Lakes basin to monitor levels and biological effects of toxic chemicals. Since these birds are at the top of the aquatic food chain, they help serve as indicators of environmental conditions.

The first signs that North American Ospreys were experiencing reproductive problems came in the mid-1960s. Fewer chicks were being produced and when nests were examined they often contained unhatched or cracked eggs, or just eggshell fragments.

Human activities and interventions have helped the recent increases in Osprey breeding populations. These increases have occurred due to restrictions on the use and discharge of DDT and other toxic chemicals into the environment.

Another type of hawk that is very different but at the same time has many similarities is a Red-tailed Hawk.