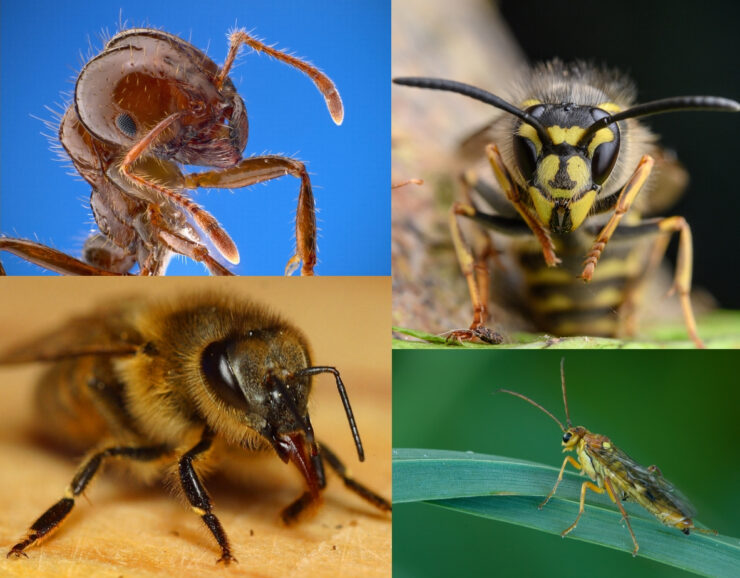 Generally Hymenoptera have chewing mouthparts but some species have specialized chewing-lapping mouthparts as do the bumble bees. They pass through complete metamorphosis, (egg, larva, pupa, adult). Winged members of this order have four membranous wings. Most Hymenoptera are beneficial insects. Many bees, wasps and hornets pollinate flowers which is important in the survival of a large number of plants.

Honey bees produce honey and beeswax which are used by humans. Other, often harmful plant eating insects are parasisized by many species of wasps who lay their eggs on the hosts’ body. When the wasp larvae hatch they burrow into the host, feed on the internal organs, and later emerge as adults. This normally kills the parasitized host. Hymenoptera species often have a social structure, which includes workers, males and a queen. The honey bee, Apis mellifera, is tended by bee keepers around the world. The carpenter ant, Camponotus pennsylvanicus, is often found in decaying wood.

The Yellowjacket Paravespula vulgaris is a predator; it will actively scavenge any source of animal protein. It’s nest is most commonly found underground. The large, gray, hanging nest of the Bald-faced Hornet Vespula maculatais a common sight, most often observed hanging from tree limbs and branches. The species fills a niche in nature similar to yellow jackets and other wasps. They are active predators of other insects and other critters of similar size.

Another member of this order worthy of mention is the Birch Leafminer Fenusa pusilla. The larva of this wasp-like sawfly attack the leaves of the paper birch, browning and distorting the foliage. Repeated infestations will generally kill the tree.