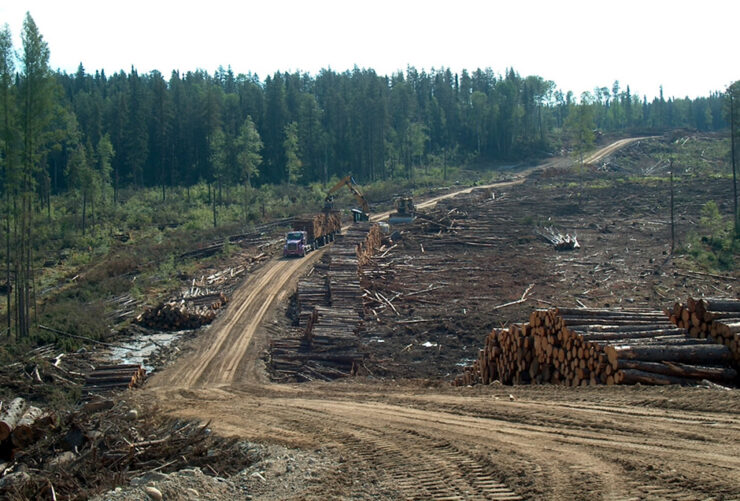 Northwestern Ontario’s vast forests have spawned an enormous regional enterprise based on wood. The region’s forest products are valued at more than $3 billion a year and the industry provides more than 15,000 jobs.

The most valuable forest product by sales is wood pulp, produced by five mills (Weyerhauser in Dryden, Bowater in Thunder Bay, Norampac in Red Rock, Kimberly-Clark in Terrace Bay and James River Corp. in Marathon). Newsprint is next, manufactured at mills in Kenora, Fort Frances and Thunder Bay. Groundwood specialty paper (a higher grade of newsprint) is made in Fort Frances and fine paper is produced at mills in Dryden and Thunder Bay.

Sawmills producing stud and dimension lumber also dot the Northwest. The largest are in Thunder Bay, but there are others in Atikokan, Hudson (near Sioux Lookout), Dubreilleville, Hearst, Longlac, White River and Dryden. Sawmilling is expanding, with new mills planned for Ear Falls and Nakina.

Other wood production exists in the form of a specialty mill (windows and doors) in Thunder Bay and plywood mills in Nipigon and Longlac. A recent development is the huge expansion of the Northwest’s chipboard and panelboard industry. A provincial initiative to use the vast and little-exploited aspen forest has resulted in two new oriented strandboard (OSB) mills at Barwick (near Fort Frances) and in Wawa. A third OSB mill might be established in either Ear Falls or Dryden.

The forest products sector is critical to the economic structure of Northwestern Ontario. In Thunder Bay, for example, forest-based products accounted for 80 per cent of the $2-billion generated by local manufacturing. The combined annual production capacity is 618,000 tonnes of newsprint, 460,000 tonnes of bleached pulp, 156,000 tonnes of coated fine paper and 310 million board feet of dimension lumber. This constitutes over five percent of Canada’s total forest-based sales.

In 1992, the forest product sector employed approximately 4,000 residents or eight percent of the local labour force. Purchases of wood by local mills generated another 1,900 jobs, half of them local.

•Ontario’s forest industry has been a source of tax revenue for 167 years: it paid its first stumpage fees in 1827.

•Between 1987 and 1992, Ontario’s forestry industries invested $2.5 billion in capital expenditures.

•Forestry is eight times more significant to northern Ontario’s economy than to province as a whole.

•The forest industry is the major activity in 70 northern communities; sixty per cent of Northerners live in forestry-dependent communities.

•Pay in forest industries is 40 per cent more than the average Ontario industrial wage.

•Forest-product manufacturing jobs have the highest “spinoff” value of all: each job produces two others in northern Ontario and up to five in the national economy.

•The North has 96 per cent of Ontario’s logging jobs, but southern Ontario has two-thirds of all value-added wood manufacturing jobs.

•The forest products industry harvests 25.4 million cubic metres of wood a year only seven-tenths of one per cent of merchantable timber available.