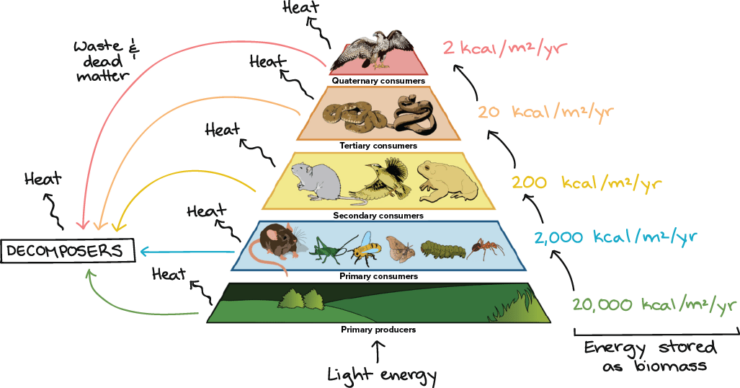 This activity should be done after students have an idea of what a food chain is including understanding the predator prey relationships.

Divide the class into working groups.

Using “Common Animal Species of the Northwestern Ontario Boreal Forest” on our site as a resource, have student groups identify at least one individual animal from the following menus to create an example of a food chain:

Example of a Food Chain

Have students draw or collect pictures of the animals they have identified and then paste them into a chain or pyramid, showing the different levels of predation.

How do some species, such as the Snowshoe Hare, survive in large numbers when they are subjected to heavy predation? How have species, like the Porcupine or Skunk, evolved to protect themselves from predators? Why do creatures like the Osprey or the Mountain Lion, at the top of the food chain, become endangered species? How does the availability of food effect animal species numbers and habitats? Are humans part of the food chain?

You may have the students create a number of food chains, in different habitats (ie. lakes and streams, marshes, forests, fields).

Can plants be a part of the food chain? Yes, this is called a “food web”.
Students can create an example of a food web by adding species from the following menus:

Have students write an essay to illustrate how human activity may alter/disrupt a food chain or web in both positive and negative ways.