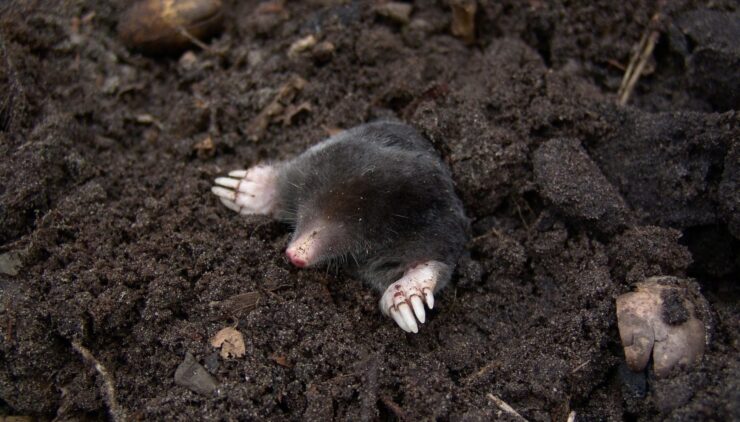 Distinguishing Features – Length: 12 – 14 cm; tail: 2 – 4 cm; weight 60 – 120 g; the female is slightly smaller and lighter than the male. This is a burrowing animal, with a cylindrical body ending in a short tail, with an indistinct neck, with front paws developed in the shape of a shovel and armed with claws.

The elongated snout is surmounted by minute and barely functional eyes. Ears indistinct. The dense and dark grey fur, dark grey to black on the top of the body, lighter below, is made up of hairs arising perpendicularly to the skin, enabling the animal to advance or retreat in the tunnels without the fur rubbing the wrong way.

The European mole is entirely carnivorous: it consumes about its own bodyweight of food per day, mainly composed of earthworms. The senses of hearing, touch and smell are well developed and make up for its poor sight.

This species moves about in a network of “galleries” situated at less than 15 cm depth but which extend down to 50 cm. Part of this network is semi-permanent and used by successive generations of moles; in general, they are not provided with molehills: as the layout is old, there is no more earth to excavate. These “main galleries” are used by many individuals. On the other hand, the temporary “hunting galleries” are dug out and used only by a single individual and not reused.

When it excavates hunting galleries, the mole expells the debris in the form of molehills. The whole of the network has a length of 100 to 200 m; it also comprises a resting place including a nest of dried leaves situated at the junction of several galleries, as well as secondary chambers, at times stocked with food reserves.

The speed of movement of a mole in its galleries is quick, about 1 m per second. The burrowing capacity is about 20 m a day.