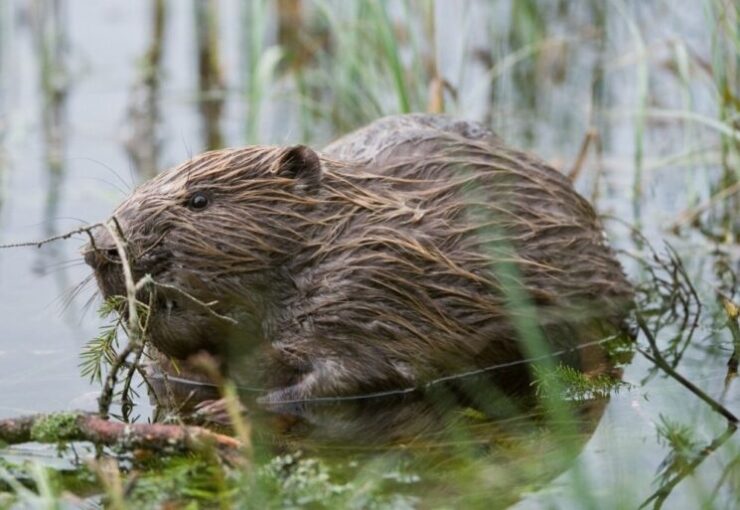 Distinguishing Features – The European beaver has very little sexual dimorphism; the average male weighs about 22 kg and is 0.9 m long, while the average female weighs 23 kg and is 1 m long (slightly larger than the male). Beavers have stocky bodies with flattened hairless tails known as scoops. They have swimming membranes between their toes and can use both forelegs like hands. The European beaver has very prominent incisors. It has a thick coat of fuzzy and straight hair that ranges from a rich glossy brown to a yellowish brown on the upperparts, and from brown to tawny on the underparts. Its small eyes have nictitating membranes and its ears and nostrils are valvular.

Freshwater lakes and rivers, usually near woodlands, in the palearctic region; common throughout Eastern Europe, Scandinavia and Russia.

The European beaver is strictly herbivorous. Its diet consists of hundreds of species of water and river bank plants such as tubers and the rootstocks of myrtles, cattails, and water lilies. Beavers also eat trees. They prefer aspen trees but also eat hazels, black poplars, lime trees, and other softwood barks. Alder and oak trees are never eaten and used only for constructional purposes. The large teeth and strong bite assist the beaver in biting and chewing its food. Long appendices help beavers to digest their high cellulose bark diets. Their food intake per day is about twenty percent of their body weight. Microorganisms break up the nutritional mush of bark that the beaver swallows and build up bacterial proteins that the beaver can digest. A beaver eats only a few species of trees, and if its diet changes it must make a gradual change so that the microorganisms can adjust to the new diet.

Beavers are social animals and live in family groups of 5 to 8 animals. The group consists of an older couple that owns the territory and the litter from the current year and the previous years. Beavers are monogamous and the female is dominant. The territory of a family group is from 100 m to less than 3 km along a river bank or shoreline.

The beavers rarely go more than 20 m from the water. Their territories are usually permanent. The European beaver marks its territory by making scent mounds that are 30 cm high and 1 m across. The mounds are made of mud and sticks and branches. The beavers have 2 anal glands that secrete a castoreum oil. This oil has a musk odor and is deposited on the scent mounds. The oil is also used to grease the beaver’s fur coat to make it water repellent. The beaver also has specialized cleaning claws on the second toe of its hind legs that are used for brushing the coat.

Beavers may migrate during the fall if food in their territory becomes scarce. They are unable to reach buds and branches high in trees, so they cut the trees down by gnawing at the trunk. When gnawing, a beaver stands upright supported by its tail. The gnawing process gives a tree trunk the well known hourglass shape. Beavers are generally nocturnal and may cut down a tree that is 16 inches in diameter in one night.

European beavers build “lodges” made of sand and clay. These lodges are usually a simple tube in the river bank that feeds into the water below the surface. If the river bank is not high enough to build a lodge, then the beaver builds a castle on the river bank. This castle is made by piling up branches and twigs and fastening them with mud. In order to keep the entrance to the lodge underwater, beavers keep the water level up by building dams. These famous water level-regulating dams are built by driving thick sticks into the mud and filling the spaces with branches and mud. They can be anywhere from 5 to 30 m in length. These dams create a good environment for many living things, including the particular trees that beavers eat.

Beavers love to dive and swim and are well adapted for these activities. Their thick water-repellant coat keeps them dry and warm while their webbed feet and flat tail are ideal for swimming. A beaver usually stays underwater for two to three minutes but can dive for as long as fifteen minutes.

European beavers communicate with each other using scent, posture, tail slaps, and several calls that sound like whistling and whining. The tail slap is used to warn others of danger. The beaver just slaps its tail against the water while it is diving to make the call.