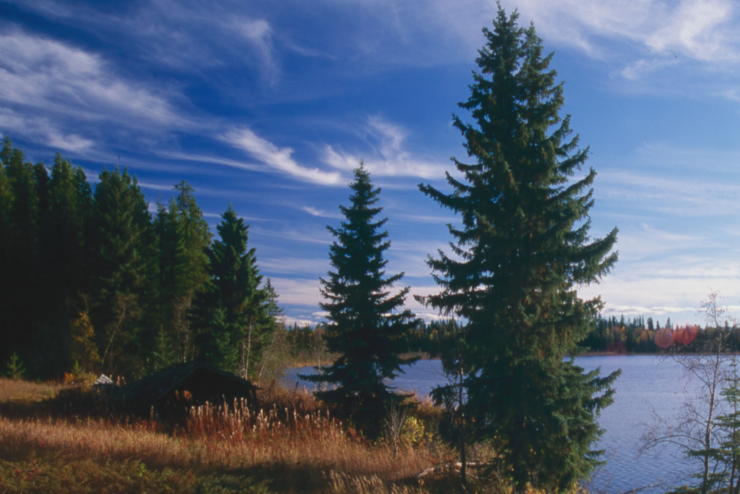 General – a small to medium-sized slow-growing, evergreen tree or dwarf shrub, having a straight trunk with little taper, and a narrow, pointed crown of short, compact, drooping branches with upturned tips; groving to an average height of 15 m. Bark: thin, scaly, and grayish brown. Branches: poor self pruner, keeping dead branches for several years. Roots: shallow and wide spreading with most in the upper 20 cm of organic soil. Very susceptible to windthrow except in the densest stands.

Flowers – monoecious, males red, turning yellow to light brown; females purple, upright, and in the upper crowns; appearing in May.

Fruit – 1.5 – 3 cm long, smallest of the spruces; nearly round, dull grey/black, in dense clusters in the upper crown, persisting for several years.

Widespread throughout North Americas boreal region; Newfoundland to Alaska, south to British Columbia, Great Lakes Region and Minnesota; both lowland and upland sites; at southern portion of range it is found primarily on wet organic soils, but farther north its abundance on uplands increases; in the Great Lakes vicinity, most abundant in peat bogs and swamps.

The Black Spruce is still cut for Christmas trees, but recently the amount harvested from natural stands has declined. In the past, specialty items made from black spruce included healing salves from the gum, antiscorbutic and diuretic beverages from twigs and needles, and rope from the roots.

Its principal commercial value is as pulpwood. The wood is made up of long fibers that produce a very high quality pulp.