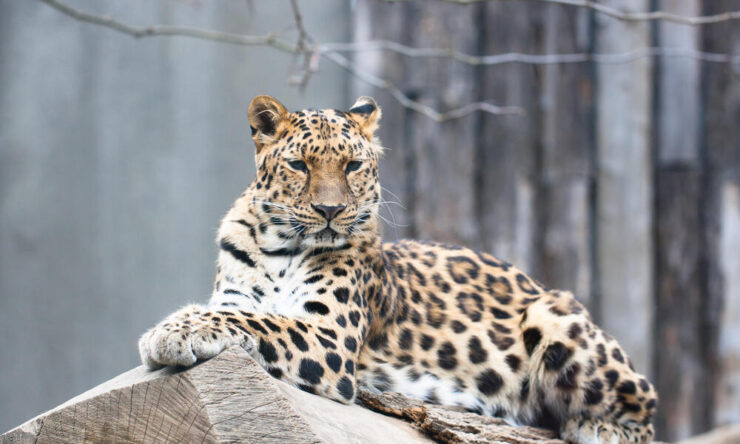 Distinguishing Features – The Amur leopard is well adapted to the harsh climate of its range. The hairs of its summer pelt are 2.5 cm long but in winter they are replaced by 7 cm long ones. Apart from its long winter coat the Amur leopard is easily told apart from other leopard subspecies by its large rosettes. It also has longer legs, probably an adaptation for walking through snow.

The Amur leopard has the most northern distribution of the eight subspecies of leopard. It is called after the river Amur on the border between China and Russia.

In the sixties and seventies the Amur leopard was still found in considerable numbers in former Manchuria, the Korean peninsula and in the southern part of Ussuriland in the Russian Far East. Today the only viable population is left in a small area between Vladivostok and the Chinese border. In China and North Korea very few leopards remain.

The Amur leopard is high up on the Endangered Species List. In theory the small strip of land west of Vladivostok where the Amur leopard is still found, is well protected. In reality however little or nothing was done for the protection of this animal. The situation changed dramatically when an anti-poaching team was established with funds provided by Tigris Foundation.

The forests where the leopards live, are surrounded by agriculture and villages. As a result the forests are relatively well accessible, making poaching a bigger problem than elsewhere. Not only the leopards themselves, but also important prey species, such as roe deer, sika deer and hare, were hunted by the villagers.

As a consequence of poaching, leopards often look for other prey and regularly visit deer farms at the forest edge. At these farms sika deer are raised for their antlers, which are sold to China for use in Traditional Chinese Medicine. Leopards climb the fences and find the tame deer easy prey. Because a dead deer means lost money, the farmers sometimes try to kill the leopards that visit their farms.

In addition, the forests are damaged by seasonal fires. Farmers burn their fields in autumn and winter to make them more fertile. Unfortunately the fires do not stop at the forest edge. After a severe forest fire a long period follows with shrubs and small trees that produce no edible seeds, such as nuts, pine cones and acorns. Consequently, there is a shortage of food for ungulates, the main prey of leopards. Due to repeated burns, some areas in Khasan have turned into green meadows without any signs of forest regeneration. Such areas have become unsuitable for leopards.