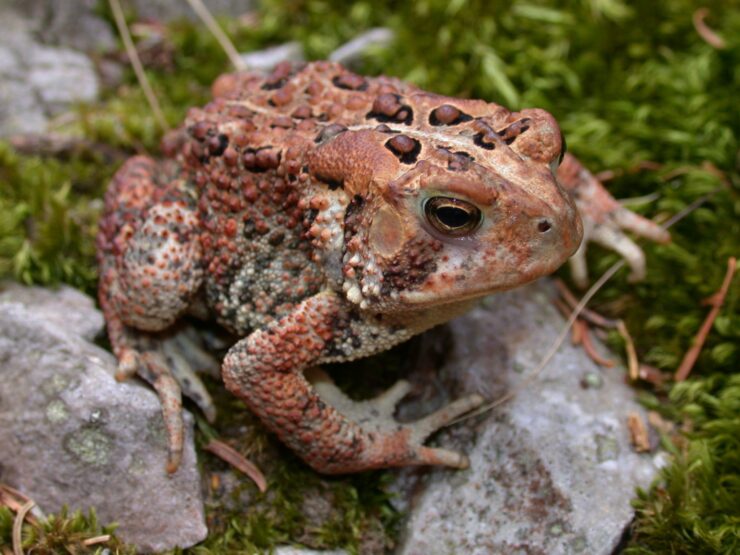 Distinguishing Features – Overall colouration, highly variable, usually a shade ofbrown (rarely gray, red, or greenish). There are black spots on the upperside which contain one or two warts; these black spots often have a white border. Oval partoid gland behind each eye. Underside, white or yellowish, mottled with black. Usually a light mid dorsal stripe runs down the back.

Throughout Northwestern Ontario, primarily near small ponds; also found in cities and towns, in parks and backyards. They only require semi permanent water for reproduction.

Breeding occurs in early May. Around breeding ponds, males may attempt to breed with anything that comes near them, including other male toads, or other species of frogs. The female releases 20,000 eggs in a string that are fertilized externally by the male as they emerge. These hatch into little black tadpoles with gold speckles which then morph into toadlets in July.

Toads eat insects and various other invertebrates. They actually snap food up with their tongues instead of pouncing on their prey with their mouths open like most frogs. Toads may use their hands and forearms to push large food items into their mouths. They are very valuable as controllers of insect pests.

Adults and young burrow into the ground to avoid freezing winter temperatures.

Contrary to “old wives tales”, toads do not cause warts. But they do produce a toxin in the partoid glands behind the eyes which is only harmful if it is ingested or rubbed into the eyes. Garter snakes are not harmed by this poison, so instead the toad puffs itself up with air to look bigger and to prevent the snake from swallowing it. It also urinates, but this really doesn’t do any harm, it just makes it unappetizing to the predator.